CITIZEN is launching three exciting new models featuring newly developed Duratect DLC Blue on the bezel and the middle link of the strap. 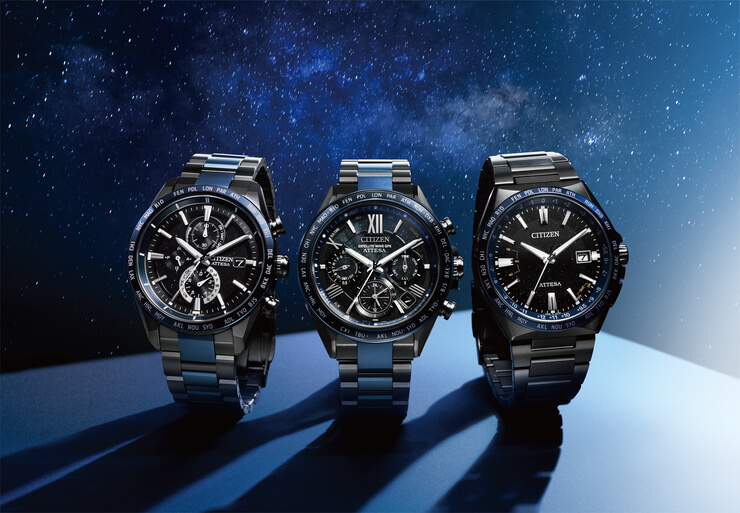 HAKUTO-R is scheduled to launch at the end of 2022*, and the designs of the Blue Universe Collection models are inspired by the stars that glitter in anticipation of CITIZEN Super Titanium’s™ upcoming journey to outer space.
*Expected launch date as of October 2022.

The bezel and strap feature our newly-developed DLC Blue, which maintains all of the features of CITIZEN’s proprietary Duratect DLC surface hardening technology in a distinctive deep blue color. We focused on thin-film interference during development - the same phenomenon that makes rainbow colors appear on the surface of soap bubbles – while utilizing our advanced DLC film-forming technology. CITIZEN has developed its Duratect surface hardening technology over decades, and its latest leap forward is DLC Blue featured on these three new models, providing scratch resistance and a beautifully smooth surface in an appealing blue color. 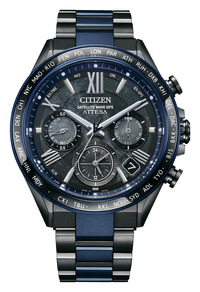 · CC4066-69E
- Bezel combining DLC Blue and a beautiful sapphire glass ring with an elegant sheen
- Appealing contrast between the glossy black color of Duratect DLC and the beautiful blue tones of DLC Blue
- Sparkling accents on the dial reminiscent of glittering stars in outer space
- Matching silver-colored accents on the hands and indices
- F950 movement - the most advanced movement for Eco-Drive Satellite Wave GPS watches, providing world’s fastest time-only signal reception in as little as 3 seconds 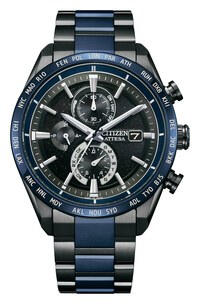 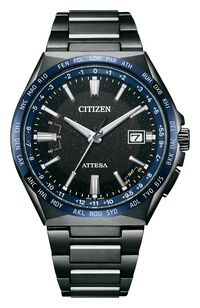 *1 Duratect is CITIZEN’s proprietary surface hardening technology. It boosts the surface hardness of metals including stainless steel and titanium, providing superior resistance to wear and protecting the watch from scuffs and scratches to ensure the surface of the metal remains beautiful for longer. DLC (Diamond-Like Carbon) is an advanced technology that provides superior wear resistance for industrial products. Duratect DLC Blue uses CITIZEN’s advanced DLC film-forming technology to provide all of the features of regular Duratect DLC, including scratch resistance and a beautifully smooth surface, in an appealing deep blue color. It provides the same level of Vickers hardness as regular DLC (1,000 - 1,400HV). Vickers hardness for stainless steel is approx. 200HV. Duratect DLC achieves Vickers hardness of 1,000-1,400 by creating an amorphous carbon hard film—mainly composed of carbon and hydrogen—on the surface of the material.
*2 Super Titanium™ is CITIZEN’s proprietary surface hardening technology to treat solid titanium. It is at least 5 times harder than stainless steel, resistant to scratches, lightweight and gentle on the skin for comfortable wearing.
*3 Eco-Drive is CITIZEN’s proprietary technology that powers watches using any natural or artificial light source, eliminating the need to replace batteries. Certified as an Eco Mark product for the first time in the watch industry.
*4 GPS satellite-synchronized watch: GPS satellite-synchronized watch captures the date and time signals sent by GPS satellites from space — orbiting 20,000 kilometers above the Earth — bringing ultra-precise timekeeping to wherever people are on the face of the globe.

ispace, inc.(ispace)a global lunar resource development company with the vision, “Expand our Planet. Expand our Future.”, specializes in designing and building lunar landers and rovers. ispace aims to extend the sphere of human life into space and create a sustainable world by providing high-frequency, low-cost transportation services to the Moon. The company has offices in Japan, Luxembourg, and the United States, with about 200 employees worldwide. ispace technologies U.S., inc., a subsidiary of ispace is part of a team led by Draper, which was awarded a NASA Commercial Lunar Payload Services (CLPS) Program contract to land on the far side of the Moon by 2025 (as of October 2022). Both ispace and ispace EUROPE S.A. (ispace EU) were awarded contracts to collect and transfer ownership of lunar regolith to NASA, and ispace EU was selected by the European Space Agency to be part of the Science Team for PROSPECT, a program which seeks to extract water on the Moon. (https://ispace-inc.com/)

* Eco-Drive, Duratect, Super Titanium™ are trademarks or registered trademarks of Citizen Watch Co., Ltd.
* The final design and specifications are subject to change without notice.
*. The availability, specifications, and related information, such as the product code for the models featured in this site, may vary by markets. If you would like to know more details, including the availability of these products in your area, please select your local website from our global site.