Citizen will release a limited edition model of The CITIZEN that will feature a light-powered Eco-Drive movement Caliber 0100 that is not reliant on any external time signal yet has an extraordinary accuracy of ±1 second per year (hereinafter, ‘Cal.0100’). 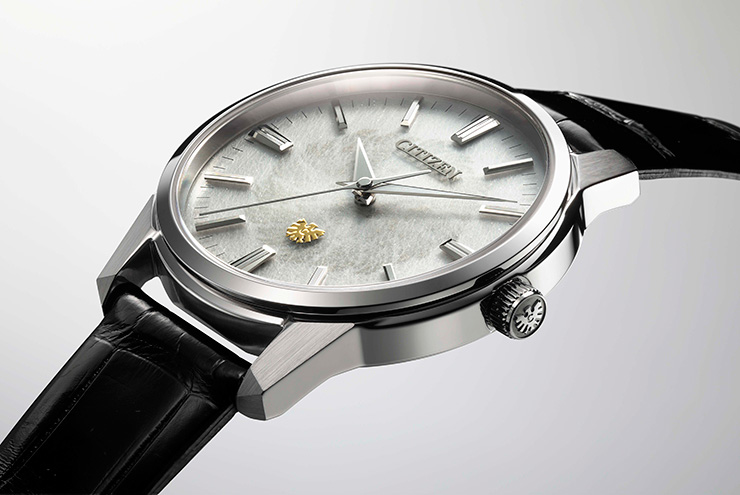 This is the first Cal.0100 model to feature the use of washi paper in the dial. The Tosa washi paper has a beautiful colour and texture with excellent light transmission. The feather-like patterns on the dial, achieved using a technique we named Kagemakie (silhouette), are created using platinum foil and platinum powder on the lower plate and can be seen through the layers of washi paper that are positioned on top. Together they emphasize the eagle emblem with its spread wings, which is the symbol of The CITIZEN series.

The second hand is made of brass, which was too heavy to position accurately and too power-consuming to use with previous Eco-Drive movements. In this model, however, it sits beautifully—perfectly—over each second marker when viewed from above. The exquisitely cut multi-faceted surfaces of the hour and minute hands make it easy to tell the time, the lugs are made to resemble crystals to represent ultra-precision, and the overall design reflects this model’s outstanding accuracy of ±1 second per year.

The stainless steel case is treated using Duratect*3 Platinum, Citizen’s proprietary surface-hardening technology, to make it scratch resistant while maintaining a light tone, and matched with crocodile leather with a distinct mottled bamboo-like pattern to achieve an elegant, classy appearance.

The gold eagle mark is featured on both the dial and the back, while the word EAGLE and a serial number can be found on the back, setting the watch apart as a limited edition.

· First-ever Washi Dial on a Cal.0100 Model
Washi paper is used on the dial for the first time on a Cal.0100 model. In the centre there is an Eagle, which is a symbol of The CITIZEN, and it is set apart using feather-like patterns created by a technique we named Kagemakie (silhouette), achieved using platinum foil and platinum powder on the lower plate. These patterns can be seen through the multiple layers of washi paper that are positioned on top. 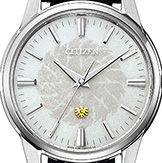 · Special Limited Edition
The gold eagle mark decorates the dial and the back, while the word EAGLE and a serial number are featured on the case back to show that the watch is a limited edition. Eagles have such outstanding eyesight that they can spot their prey from as far away as 1000 metres. In ancient times they were a symbol of prescience and a familiar figure in the lives of humans. The eagle emblem signifies the concepts behind The CITIZEN series, which are ‘Look Ahead in Pursuit of the Ideal’ and ‘Become an Integral Part of Users’ Lives’. 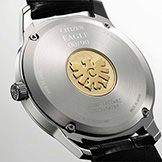 · Cal.0100: The World’s Most Accurate Light-powered Movement
The Cal.0100 movement used in The CITIZEN is not reliant on any external time signal yet has the ability to keep the time with an accuracy of ±1 second per year. This movement is the result of Citizen’s technology and drive in the pursuit of the ideal wristwatch, and it conveys to us the preciousness of each second of our lives.

· Case Lugs with a Crystal Motif
The case lugs are designed to resemble crystals, which are a symbol of accuracy and technology, and emphasize to us the preciousness of each second.

· Second Hand that Points to the Preciousness of Each Second
The long second hand is made of brass, which was too heavy to position accurately and too power-consuming to use with previous Eco-Drive movements. The beautiful brass hand signifies the most basic and essential design concept for a watch—eternally accuracy.

Product Specifications
*1. As a light-powered watch. As of October 2021. CITIZEN Watch survey.
*2. Eco-Drive is CITIZEN’s proprietary technology that powers watches using any natural or artificial light source, eliminating the need to replace batteries. Certified as an Eco Mark product for the first time in the watch industry.
*3. Duratect is CITIZEN’s proprietary surface hardening technology that enhances the surface hardness of metals such as stainless steel and titanium, protecting watch bodies from scratches and damage. This technology offers excellent resistance and maintains the luster of metals for long periods of time.

The CITIZEN brand aims to become an integral part of users’ lives by tirelessly pursuing the next ideal in timekeeping accuracy, quality, design, and reliability. The CITIZEN special site: https://www.citizenwatch-global.com/the-citizen/

* The availability, specifications and related information such as product code for the models featured in this site, may vary by markets. If you would like to know more details, including the availability of this products in your area, please select your “Local Website” from our global site.

◼ Cal.0100 Eco-Drive Movement is the Most Accurate in the World
The Eco-Drive movement used in this model is a light-powered movement that maintains accuracy of ±1 second per year and is not reliant on any external time signal. It was announced by Citizen Watch in 2018 on the occasion of the 100th anniversary of the founding of the company and is the most accurate in the world. Citizen Watch is dedicated to the constant pursuit of new possibilities for watches while maintaining their fundamental functions.
The first model using the movement was released in 2019 as the crystallization of the company’s ability as a manufacture d'horlogerie—a manufacturer that can handle everything from the production of parts to the final assembly of products in-house. The precise hand movement is achieved thanks to this ability to create precision parts powered by the revolutionary light-powered Eco-Drive and assemble them with great accuracy.

∙ AT-cut Crystal Oscillators
Astonishing precision is achieved by using AT-cut crystal oscillators, which have a frequency of 8.4 MHz (8,388,608 Hz), 250 times higher than the tuning fork-shaped oscillators used in ordinary quartz watches. AT-cut oscillators also exhibit higher resistance to the effects of temperature and gravity and change less over time. Although AT-cut oscillators were formerly unable to be used in watches due to excessive power consumption issues, because Citizen Watch does everything in-house it was possible to overcome this problem by taking time to select the right materials and carrying out extensive design, testing and adjustment to improve energy efficiency. Now the oscillators can run for approximately eight months using the Eco-Drive’s Power-Save function.

∙ LIGA Process to Produce Precision Parts
The most prominent feature of Cal.0100 model watches is that the second hand accurately aligns with each of the indices when viewed from directly above. The precise action of the hands, which speaks of the beauty of each second, can only be achieved using the LIGA process* that makes processing and production of high precision parts possible. Unlike ordinary gears and springs produced using cutting or pressing, the special part we call the ‘sanban-modoshi-guruma’ consists of a uniquely shaped spring and gears made using the LIGA process. This is the key to controlling even t slightest backlash from gears and maintaining hand movement accuracy.
* LIGA process: The LIGA fabrication process is a processing technology using photolithography and electrocasting, suitable for manufacturing of ultra-precise parts and microstructure parts.

∙ Assembled by Meisters
Dedicated Meisters, who are the most skilled craftsmen at Citizen Watch, take charge of assembly and ensure the highest degree of accuracy. In the final inspection, they personally check each watch using an imaging device to ensure that the second hand lines up properly with all 60 indices.

∙ Technology Maintains High Accuracy
This model is equipped with a function whereby temperature change is checked every minute, so that compensation can be made for even the slightest delay caused by a change in temperature. As Citizen Watch insists on practicality, the watch is able to maintain accuracy under normal environmental conditions in many regions in temperatures ranging from 5–40°C. The circuit has a shock detector function and hand movement adjustment function, while the movement is resistant to magnetic fields. This combination of technologies makes it possible for the watch to maintain an extraordinary accuracy of ±1 second per year.

∙ Light-Powered Eco-Drive
Eco-Drive is one of Citizen Watch Company’s core technologies and uses the light that shines on everyone wherever they are to power the watch. This enables the watch to maintain an extraordinary accuracy of ±1 second per year. The Cal.0100 Eco-Drive movement benefits from the technology that Citizen has developed over the past 40 years as it has constantly sought to improve the Eco-Drive movement.