Slated for launch in the autumn of this year, CITIZEN unveils three new “Caliber 0100” watches, named after the Eco-Drive movement, that delivers the world’s most precise time-keeping accuracy of within ±1 second per year.

For over 40 years, CITIZEN has pursued higher precision always with Eco-Drive. Since the advent of quartz watch technology in the 1970s, CITIZEN was quick to understand the shortfalls of quartz watches, namely the relatively short battery life, the inconvenient process of replacing batteries, and most importantly the environmental issues of battery disposal.

In the search for a better way to power watches, CITIZEN began developing a new method using the limitless energy of light. Eco-Drive light-powered technology became the premier heart of the brand and light has remained its core inspiration for more than four decades of constant improvement. Light is available anywhere in the world, and exemplifies CITIZEN’s philosophy of contributing to society and using its manufacturing prowess to enlighten citizens of the world.

This year marks its new century, with CITIZEN pushing technologies to extreme limits of precision time-keeping to a world’s first accuracy of ±1 second per year. “Caliber 0100” represents its most innovative drive movement and the brand’s drive to evolve watch manufacturing to a new world-leading level.

Quest for the perfectly pure second
“Caliber 0100” autonomously calibrates time at an ultra-high accuracy of ±1 second per year internally without relying on data from radio towers or satellites. A single second measurement from this movement is exponentially more accurate than other watches, measuring each second at its most precise and authentic reading.

AT cut type crystal oscillators, however, require greater amounts of energy to operate. CITIZEN was able to compensate for this by thoroughly vetting materials used, intelligent designs, and refined control over its powersaving strategies. “Caliber 0100” technology allows Eco-Drive to run continuously and is significantly more stable for up to six months on a single full charge (8 months on power save mode), even without the presence of a light source.

What’s more, “Caliber 0100” maintains its greater accuracy by continuously monitoring and adjusting for frequency and temperature shifts once every minute. The optimal running temperature is between 5°C to 40°C, which is considered the most practical watch temperature environment for most regions of the world.

A new circuit design also includes higher shock resistance, which automatically corrects positions of the watch hands, and an antimagnetic feature protecting the movement from effects of magnetic force. All these innovations combine to deliver an unprecedented ±1 second per year precision accuracy. 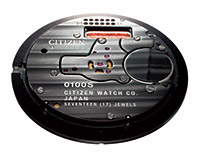 Beauty measured with each passing second
The “Caliber 0100” expresses the beauty of individual seconds in its purest form as well as represents CITIZEN’s bold direction to “pursue the true essence of a watch.” Superfluous adornments have been minimised to produce the ultimate simplicity. 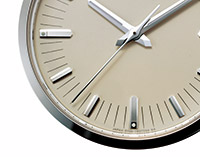 Among the most impressive characteristics is the perfect alignment of the second hand and indices when viewed from the front. Individual hand movements are the physical expression of a “second in its purest form,” achieved by adopting the LIGA fabrication process*4 (a fabrication technology for making high-aspectratio microstructures) for individual components. Ordinarily, gears and springs are
machine cut and pressed. With LIGA fabrication, more intricate components can be manufactured. Special components made by combining customized springs and gears processed by LIGA fabrication prevent even the smallest inconsistencies of gears to control hand movements, and enables hands to align perfectly with the indices.

CITIZEN’s own skilled watch-making meisters are responsible for assembling “Caliber 0100.” These master crafts people oversee and ensure the highest quality and accuracy of the brand’s watches. They are also entrusted to ensure precision alignments of the second hand with each of the 60 indices once it is set in.

White Gold Model (AQ6010-06A)
The beauty of simplicity is magnificently reflected in this limited edition with ultra-precision accuracy of ±1 second per year.

The case and crown are crafted of clear white gold with a crystal design motif suggesting ultra-precision and the crystallization of CITIZEN technologies, as well as “purity” of individual seconds. The “Caliber 0100,” incorporated in the white gold case, is made of a black, discolouration- and corrosion-resistant ruthenium plated material, with a unique striped finish visible on the back of the watch
through sapphire glass.

The tip of the second hand and the edge of the ivory dial create corresponding arcs, enhancing the second hand movement that perfectly aligns with the indices. The strap is a black crocodile texture with subtle stitches in the same colour. An individual serial number is etched on the back, indicating the limited number of 100 units available for the worldwide market. 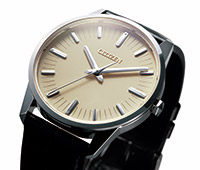 Super Titanium™*5 Models (AQ6021-51E / AQ6020-53X)
AQ6021-51E comes with a metallic black dial and quality rich lustre. The dial absorbs light through an array of tiny apertures on the front, suggesting the relationship between light and time.

AQ6020-53X comes with a mother-of-pearl dial evoking the never-ending passage of time in the natural world. The contrast between the sophisticated mother-of-pearl pattern formed over many years and the second hand marking each precise second makes this watch uniquely striking. The presence of moments in the passage of eternal time — highlighted by ultra-precise accuracy of ±1 second per year — is envisaged in the design.

Both models feature the “crystal” motif for the case, crown and bracelet. The evocative cuts from various angles provide a variety of expressions depending on the angle of light. Designed for longevity, these models are constructed from Super Titanium™ with Duratect α*6. A serial number is featured on the back of the case indicating the limited number of units available worldwide.

<About CITIZEN WATCH>
CITIZEN WATCH is a true manufacture d'horlogerie with a comprehensive manufacturing process that extends from creating a watch’ s individual components to its final assembly. The company operates in more than 130 countries around the world. Since its founding in 1918, CITIZEN has held the belief of “Better Starts Now” — that is, no matter who you are and what you do, it is always possible to make something better, and now is the time to start doing it. Sharing this belief, we have made watches, invented and improved technologies and explored the future of watches such as our proprietary light-powered Eco-Drive technology and state-ofthe-art satellite-synchronised timekeeping.


※1: Eco-Drive is CITIZEN’s proprietary technology that powers watches using any natural or artificial light source, eliminating the need to replace batteries. Certified as an Eco Mark product for the first time in the watch industry.
※2: As a light-powered watch. As of February 2019, CITIZEN survey.
※3: To be marketed in specific stores.
※4: The LIGA fabrication process is a processing technology using photolithography and electrocasting, suitable for manufacturing of ultra precise parts and microstructure parts.
※5: Super Titanium™ is CITIZEN’s proprietary technology to treat solid titanium with surface hardening technology. It is at least 5 times harder than stainless steel, resistant to scratches, lightweight and gentle to the skin for comfortable wearing.
※6: Duratect is CITIZEN’s proprietary surface hardening technology that enhances the surface hardness of metals such as stainless steel and titanium, protecting watch bodies from scratches and damage. Duratect α, an alloy coating with a Vickers hardness rating of more than 2,000Hv — double the hardness compared to conventional Duratect — is utilised for the case and band, This also maintains the lustre appearance of a precious metal for long periods without being affected by scratches or other damage.(Vickers hardness of stainless steel is approximately 200Hv.)

* The final design and specifications are subject to change without notice.
* Eco-Drive is a registered trademarks or trademark of Citizen Watch Co., Ltd.
* The availability, specifications and related information such as product code for the models featured in this site, may vary by markets. If you would like to know more details, including the availability of these products in your area, please select your "Local Website" from our global site.